I have been asked by several readers in my home state to go through some of the names that are going to appear on the Georgia ballot for Governor, Senate and Ag Commissioner. Here we go!!!
Governor

Nathan Deal (R):
Mr. Deal was elected to the House of Representatives in 1992 as a Democrat. He joined the Republican party in 1995.
He is pro-life. He is endorsed by the NRA and receives an A rating for his stance on Gun Rights. He voted against the bailouts and is against birthright citizenship.

Karen Handel (R):
GA Secretary of State. Implemented GA's photo ID law which requires voters to produce identification before casting a ballot.
Pro Gun Rights, pro-life, anti gay marriage.
She is a proponent of a Fair Tax and an easy to understand tax code. She believes in enforcing the borders and as Secretary of State, she implemented the “SAVE” program to verify the work visa status of all new applicants for professional licenses who are not U.S. citizens

Roy Barnes (D):
Began his career in politics in 1974 when he was elected to the GA Senate. Barnes was elected governor in 1998. His claim to fame was removing the Confederate battle symbol from the GA state flag.
He was beaten by Sonny Purdue (R) in his 2002 reelection campaign. Purdue went on the serve 2 terms.
Barnes is supported by teachers (read teachers unions) and women (read feminists). My personal pet peeve is that his campaign commercials say "That's not Fair!" Life's not fair, Roy.
I'm between Oxendine and Handel on this one. I'm leaning toward Oxendine.
US Senate 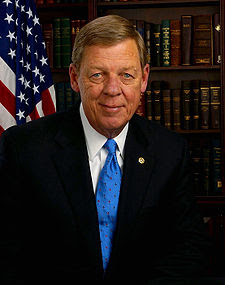 Johnny Isakson (R):
Elected to the US Senate in 2005. Pro-life, anti gay marriage, pro-gun rights.
Isakson plans to vote against Kagan nomination.
He is dedicated to securing our borders.

Michael Thurmond (D):
Currently the Commissioner of Labor for Georgia.
Not really finding a whole lot more about him. Check out his site here.
No-brainer: Vote Isakson.
GA Agriculture Commissioner

Gary Black (R):
Runs a family farm in Commerce GA. Over the years he has worked with and held positions in many Agricultural Organizations including, FFA, Ag Hill Council, Farm Bureau and GA Agribusiness Council.
Apparently, he also ran a Lobbying Firm and his opponent, Darwin Carter, is accusing him of some ethics violations.

Darwin Carter (R):
I'm going to forgive him for an unfortunate name.
I've found some articles in which Carter is accusing Black of some wrongdoings while president of the Georgia Agribusiness Council.It all sounds a little sketchy on Black's part.
Carter worked with the USDA during the Reagan Administration.
Good article by Carter here.

J.B. Powell (D):
I couldn't find a site for his campaign for Ag Commissioner. In the state senate, he supported a bill that would "revise comprehensively" our concealed carry laws. The bill was vetoed by the Gov. Sonny Purdue.
Based on what I've found so far, I am leaning toward Carter. I'm interested to hear if anyone has any more information on the whole ethics thing.
Here are a couple sites that helped me put this together and should help with the positions I didn't mention.
GA Race Tracker
GA Tea Party Voter's Guide
I've been so focused on the national scene that I haven't paid that much attention to local races before today. I always welcome input and more information.
Posted by Kristin at 12:00 PM