Dictator of the People's Republic of America 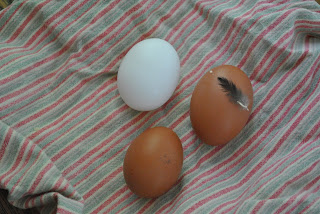 The eggs have nothing at all to do with this post, but I needed something in here that wasn't so utterly depressing. Again, the white one is for comparison.

Today, I got a monster-sized egg and found a smaller brown egg which must have been from Tuesday since that's the last time the birds had access to the space where the egg was found. I'm guessing the dark brown eggs are from a barred rock based on the black petticoat feather I found stuck to the big one.

That's all the fluff, I have today.

I don't want to sound overboard here, but I am truly scared for this country. I believe we are closer to a dictatorship than ever before and I can only hope and pray that we can pull out of this somehow.

What makes me think we are in big trouble?

The Health Care Law--
This thing took over 1/6 of our economy. We still don't know everything that is in it, but the more we see, the worse it gets.

How about Sec. 9006 which will require small businesses to submit 1099 forms for the purchase of any good or service over $600? And they claim to wonder why there are no jobs. This addition to the tax code may affect your ability to buy gold. FDR took all the gold in 1933; this regime is nudging you away from it.

Financial Reform--
The wannabe dictator signed this one yesterday at the Ronald Reagan Building. Nice thumb-in-the-eye there, Barack.

Check out my previous posts on the topic. Chris Dodd said of the bill, "It took a crisis to bring us to the point where we could actually get this job done." and "No one will know until this is actually in place how it works."

National Popular Vote--
The folks over at NationalPopularVote.com sure want me to shut up about this. The organization's leaders have said, “When people complain that it’s an end run,” Dr. Koza said, “I just tell them, ‘Hey, an end run is a legal play in football.’ ’’ and "Barry Fadem, the campaign's president, believes the 20-25 states needed to control the Electoral College will adopt the compact before the 2012 election."

Internet Kill Switch--
The left already owns the media. Those of us who want to learn the real truth have to find it ourselves. Where do we look? The internet and Fox News. They are well on their way to giving the president the power to kill the internet for as long as six months!

Presidential Assassination Program--
The regime is defending their right to kill citizens off the battlefield for being suspected terrorists. What?


Attacks on Private Business--
From the auto industry to the oil industry to the fishing industry. American businesses are under attack. Despite Nancy Pelosi's views on unemployment benefits, there are no benefits if there are no employed people left to pay taxes. God help us when they get a climate bill passed!


DISCLOSE Act--
Sounds benign doesn't it? This cancerous bill is an assault on the 1st Amendment and will basically ensure that only unions will be able to contribute to campaigns. Even the NRA sold out on this one.


Immigration Reform--
If you were trying to push the government over the brink while buying yourself more voters, what better way than to stop enforcing the border and grant millions of illegals amnesty. This regime is going so far as to sue Arizona for trying to enforce the law and protect the border.


Infringe on the 2nd Amendment--
Obviously some of these things are going to tick off the populace, so better make sure that the little people are not able to defend themselves from tyranny. The 2nd amendment was upheld by a slim 5-4 margin this year. If you can't go through the Constitution, go around it with treaties and international law.


Folks, this is after only 18 months and I am sure I am forgetting stuff that should be here (like the Wannabe ordering BP to pay). We have a lame duck congress we are going to have to contend with soon, and with an 11% approval rating, they ain't got nothin' to lose. I can only pray that most of this can be undone and undone before it is too late for the Republic.
Posted by Kristin at 5:33 PM